The forecast called for 60% possibility of showers, but by noon, it was apparent that the showers had turned into full-fledged rain, as around 50 Cornwall Curling Club members and friends made their way around the front nine of the Countryview Golf Course for their annual 9-hole, best ball, golf tournament. Those lucky enough to get an early tee-time emerged a little dryer than those who drew a later start, such as the Danny Kneabone foursome, pictured here heading to the 9th green: 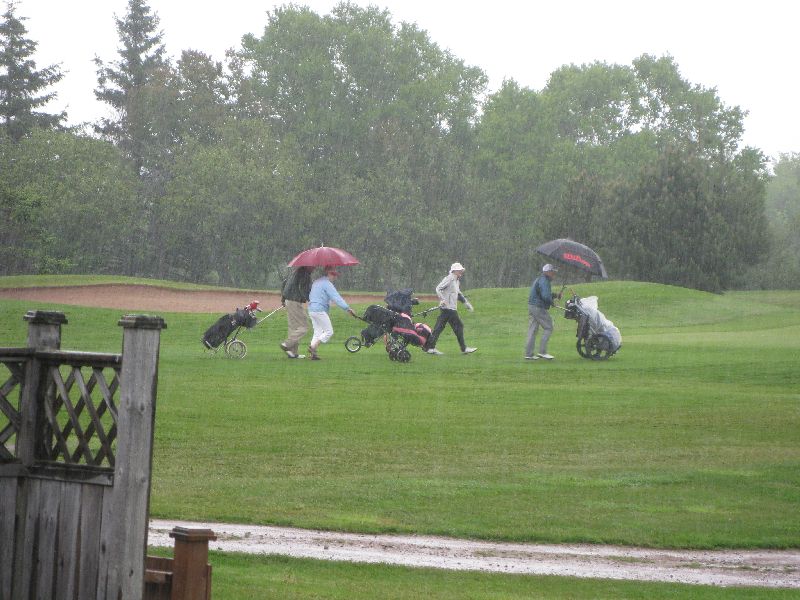 Meanwhile back at the clubhouse, Golf course owner Carl Currie,  under cover of the  deck roof, was cooking up burgers and hot dogs for the hungry masses, closely supervised by his son Kris, along with Bob MacWilliams and Paul Neima. 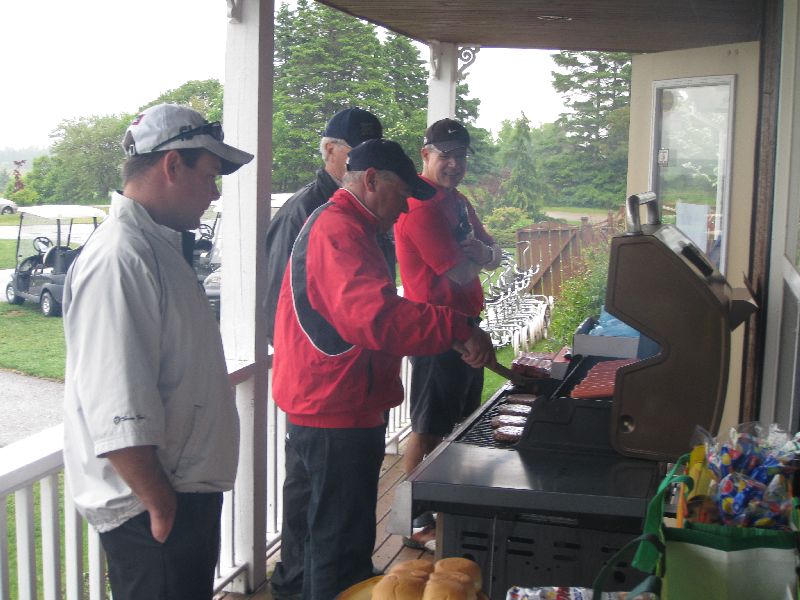 Others stayed warm and dry inside the clubhouse: 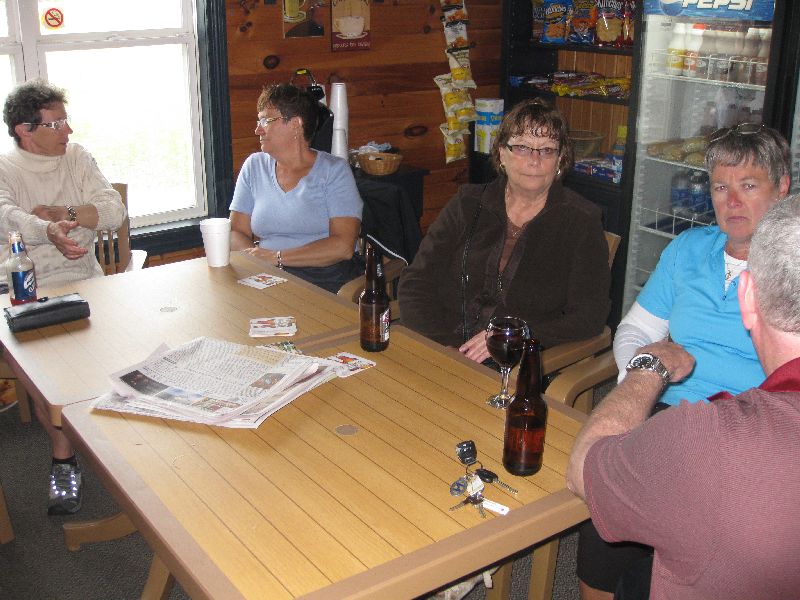 Still others braved the covered part of the outdoor deck, and enjoyed a new Beach Chair Lager or two: 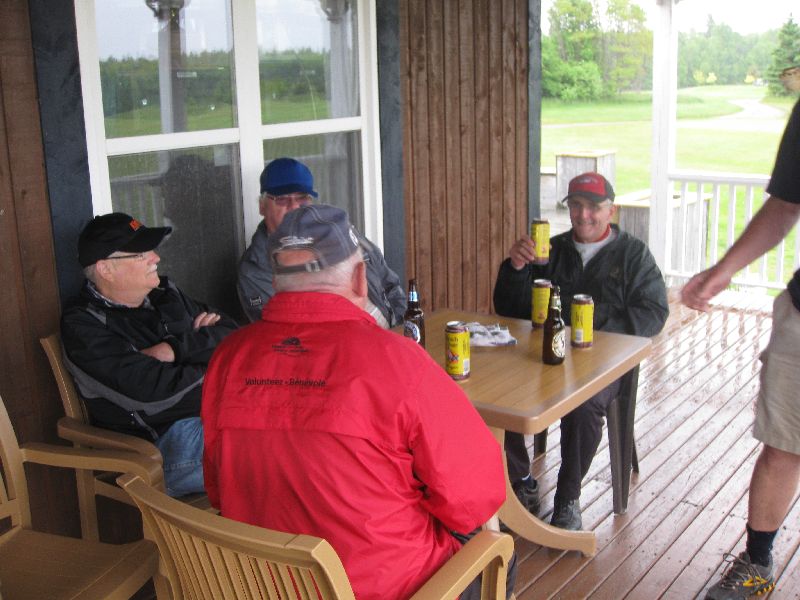 Finally, everyone arrived back at the clubhouse, finished their burgers, dogs, and cake, and the crowds assembled for the prize presentations: 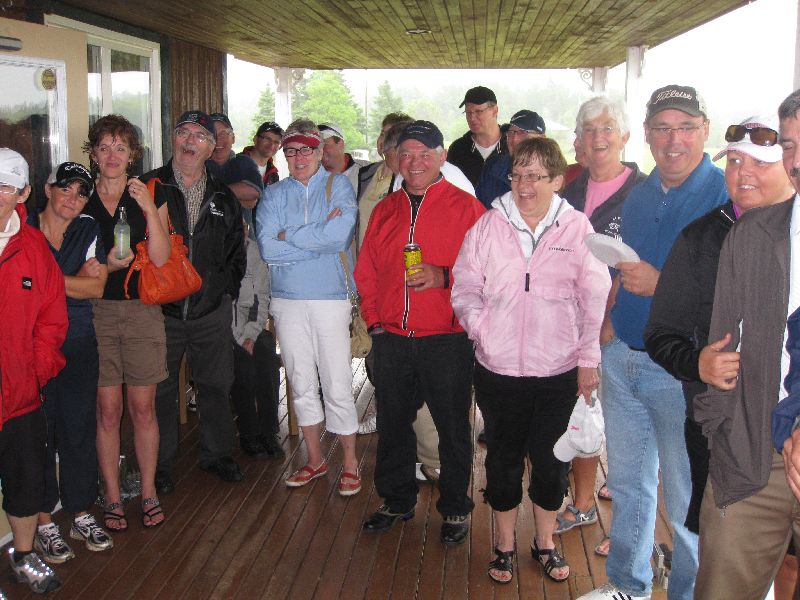 Organizers Karen Currie from Countryview, and Bob Fowler, got ready to hand out a huge table-full of prizes, from generous sponsors including Countryview, Kenmac Energy, Traction Heavy Duty Parts, Prebilt Steel, and KFC. 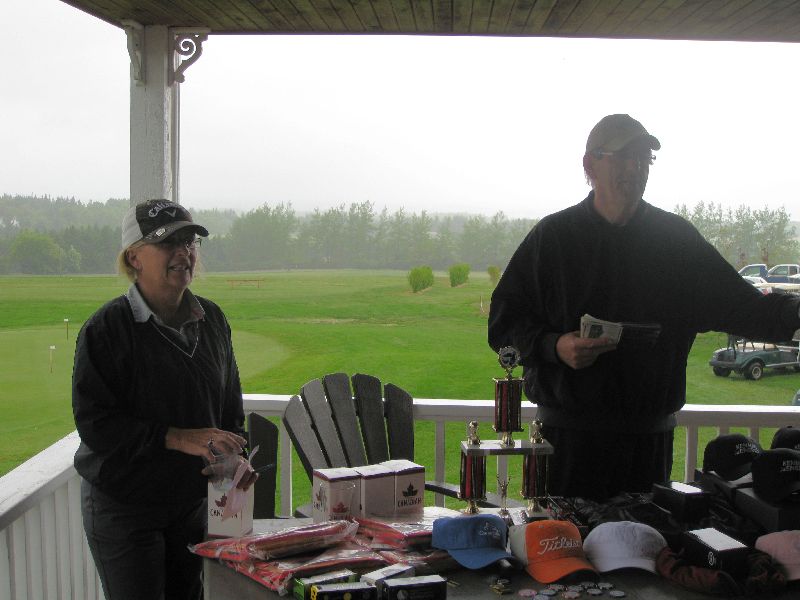 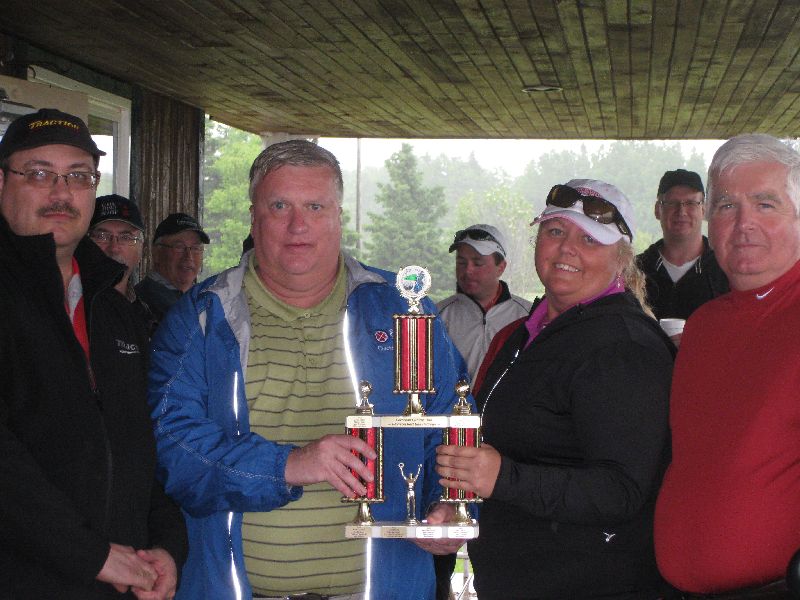 There was a new wrinkle in the best ball format this year, on the 9th hole, where playing order was chosen at random, with each player in turn hitting the same ball to the green using a seven iron, and then using a putter on the green. Some teams pulled it off in six or so, but one team, playing in heavy rain, as we saw pictured earlier, took nine strokes to do it, winning prizes for “nine on nine”: 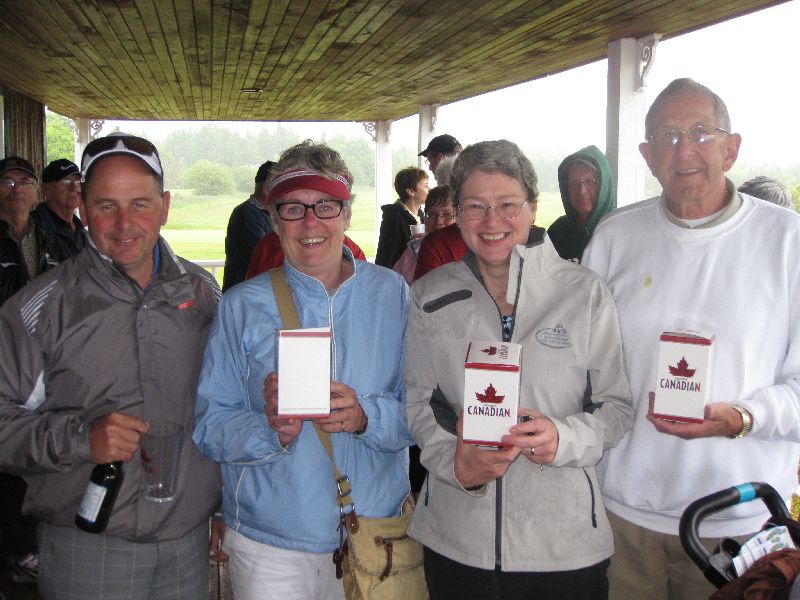 “Closest to the pin” winners were Darlene Kneabone, Kris Currie, and Rick Doiron: 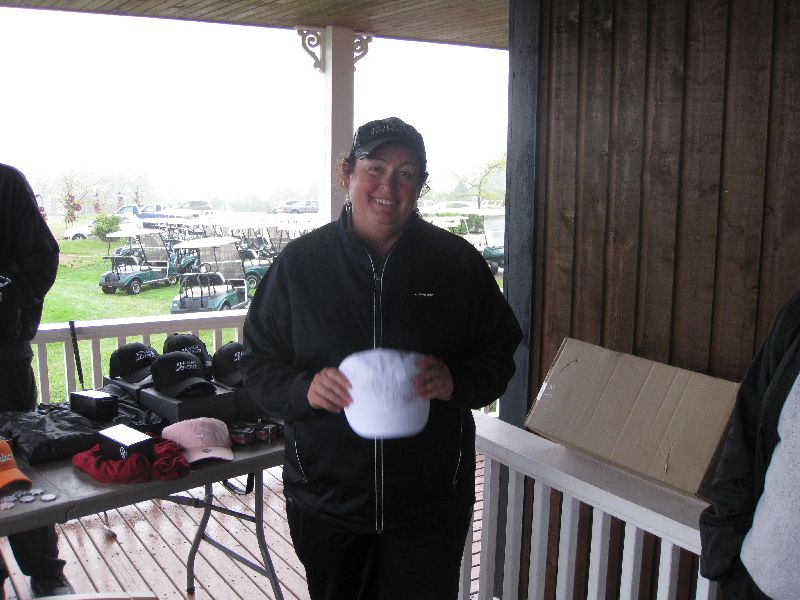 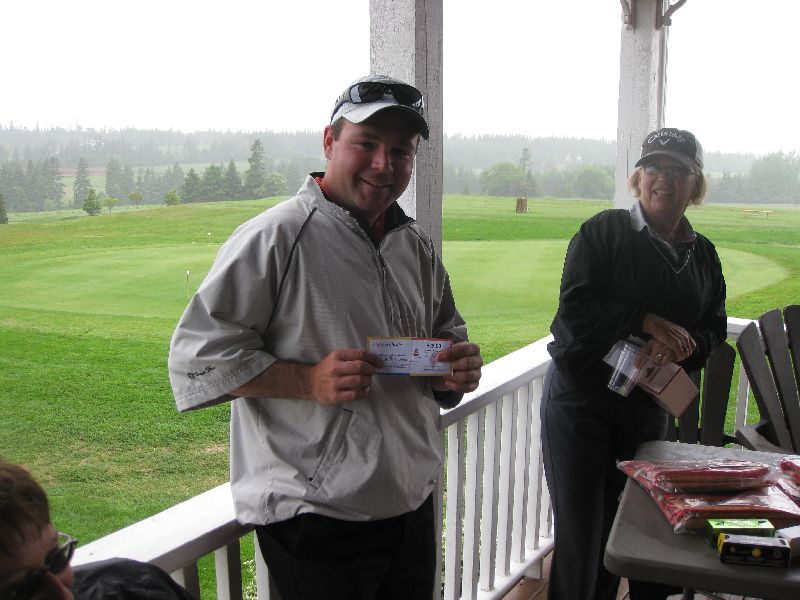 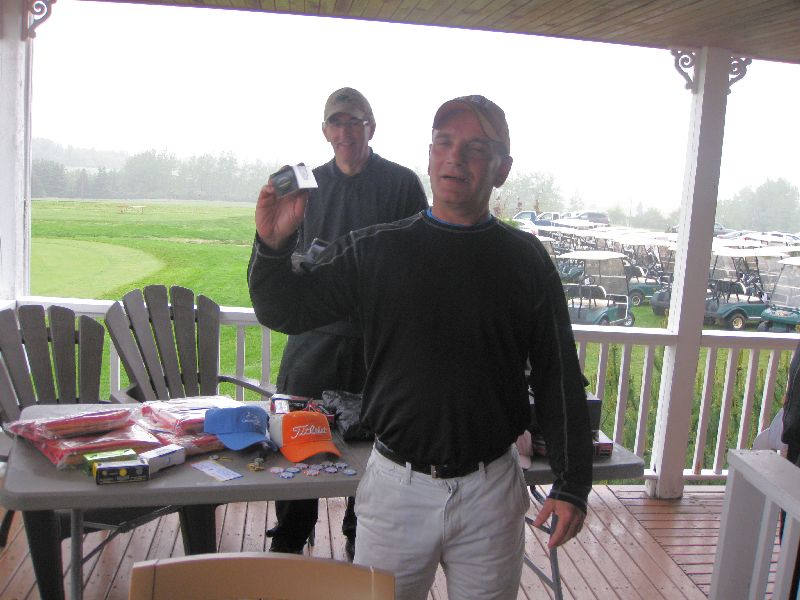 Long drive winners were frequent women’s winner Brenda Campbell, and Dave Hunt who won the “longest men’s drive for a person whose last name is not Currie” category, after Kris and Carl, who were first and second, opted out of the prizes. 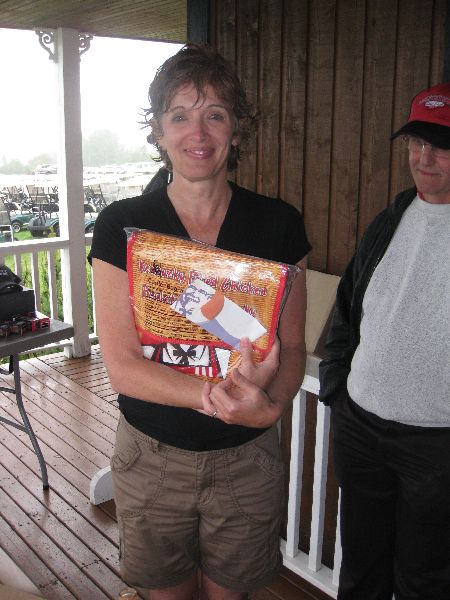 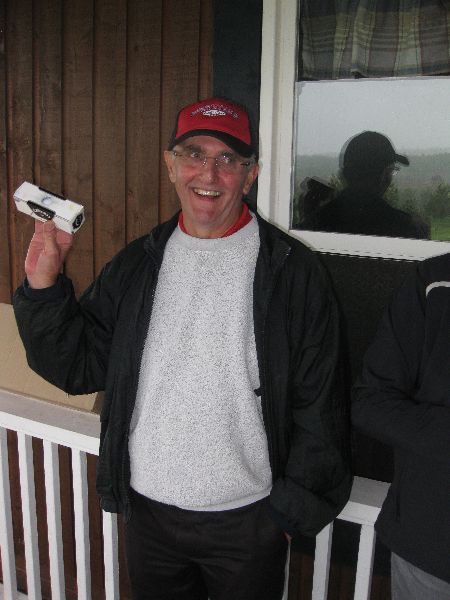 Following the awarding of the main prizes, a large number of door prizes were handed out, with just about everyone in attendance going home with a prize or two.

Click here for our complete photo album from the event.

Thanks again for another great event, thanks to the sponsors (mentioned previously), to Carl, Karen and Kris from beautiful Countryview Golf Course, who have been hosting this event for 13 years, and to Bob and the other organizers. See you back on the curling ice in the fall! 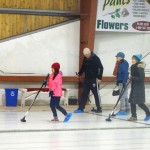 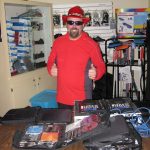 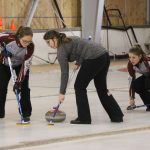 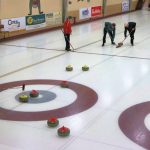