O’LEARY (by Eric McCarthy)– As a member of the Maple Leaf Curling Club from the time the sports facility opened in 1978, this year’s P.E.I. Curling Hall of Fame induction ceremony was a double honour for O’Leary’s Clair Sweet. 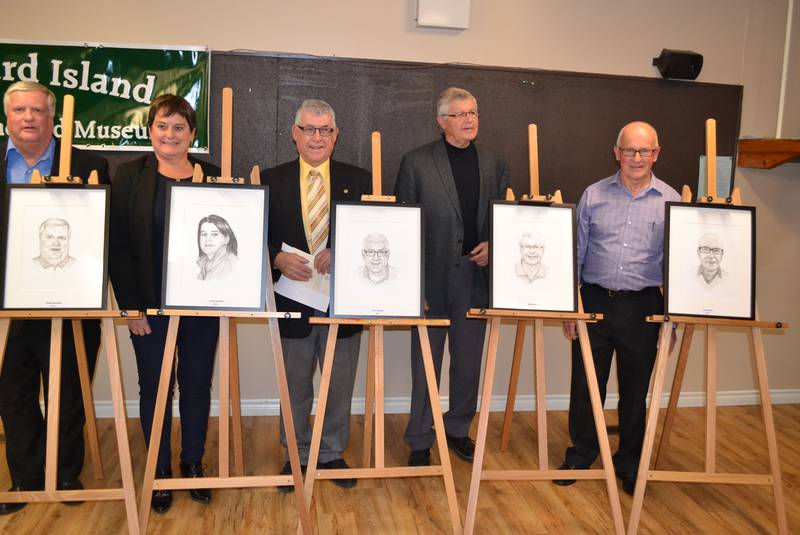 His home club is now the permanent home for the Hall of Fame. Portraits of all Hall of Fame members are displayed in the club’s main entrance and at the top of the stairs.
“We’re pleased,” said Sweet, the club’s past president. “It’s going to add to our entry way. It’s a nice addition to our club as well as giving them a home for pictures at this time.”

Sweet is the second member of the Maple Leaf Curling Club to be named to the Hall of Fame.
Sweet, Ernie Stavert, Derek MacEwen and Cliff Poirier were enshrined in the builder category, and Cornwall curler Susan McInnis joined in the “curler” category.

Internet age
MacEwen is credited with bringing the sport of curling into the Internet age, having built the website to post results from the 2000 Tankard at the Cornwall Curling Club. He’s been keeping curling fans updated on curling activities at the club and at provincial competitions across P.E.I. ever since.

Long involvement
Stavert has been involved with curling for close to 60 years, having played on natural ice the year the Crapaud Curling Club opened and having been part of the committee that led to the opening of the Cornwall Curling Club.
He pioneered stick curing in the province about 15 years ago, and has been part of its growth across P.E.I.

Click for the full story, including more information on all five inductees, in the Journal Pioneer.