The first of three boy’s and girl’s qualifier games for the Monday championship round at the PEI Under 18 Curling Championships go Saturday morning at 10 at the Cornwall Curling Club.

The Under 16 champion Brayden Snow team from the Silver Fox Curling Club in Summerside had a bye to the qualifier game in the three-team boy’s section. They will face the defending U18 champions and Canada Games team, skipped by Mitchell Schut out of the host club. Team Schut stole deuces in ends six and seven and ran the Chase MacMillan team from Charlottetown, who were finalists in this year’s Under 16 event, out of rocks in the eighth end for a 7-3 win in the Saturday evening “B” semi-final.

The defending champion Lauren Ferguson-skipped girl’s team, who are also this year’s Pepsi Junior (U21) champions and Canada Games team, scored three deuces against the U16 champion Rachel MacLean team in the opening draw on the way to a 7-3 win and a ticket to the girl’s “A” Qualifier.

The Emily Sanderson squad had a 10-3 win over the Clara Jack team in their opener, taking six points in the fourth end, and came out on the winning side of a tight battle  in their Friday evening against Team Sydney Howatt, with Sierra Clyke calling the game. In that match, Sanderson took singles in the first 3 ends, and lead 3-1 at the fourth end break. Team Howatt came on strong in the 2nd half with three stolen ends in a row — a single in the fifth, a deuce in the sixth, and another single in the seventh for a 5-3 lead going into the final end. It came down to a measure for second shot in the 8th, with Sanderson having shot stone. If the second stone was Team Howatt’s, they would have a 5-4 win, but Sanderson won the measure, bringing the game to an extra end. The last end had a logjam of rocks in front of the house, with Sanderson lying 1. The Howatt team were unable to get their rock into position past the guards and gave up a steal of one to the Sanderson rink, who now face Ferguson in the 10 am Saturday “A” final. All five girl’s teams are from the host Cornwall Curling Club.

The “B” semis go Saturday at 2 pm, with the B Qualifier games at 6 pm.

The eventual event winners will advance to the third-annual Canadian Under-18  Boys and Girls Curling Championships, to be played April 2-7 at the Glen Allan Recreation Complex in Sherwood Park, Alta. 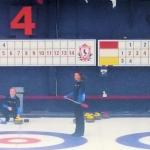 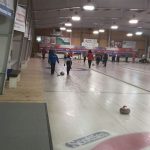 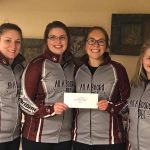 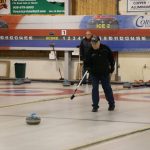