The Lauren Ferguson rink will once again represent PEI at the Canadian Under-18  Boys and Girls Curling Championships, this time at the Glen Allan Recreation Complex in Sherwood Park, Alta., from April 2-7, after going undefeated to win the Under 18 Provincial Girl’s title Sunday afternoon at their home rink, the Cornwall Curling Club. As they won all three section finals in the modified triple knockout draw, the “A” against the Emily Sanderson team, the “B” against the Rachel MacLean rink, and the “C” this afternoon, 7-2 over the Sydney Howatt foursome, the Monday championship round is not required. All five teams entered in the Girl’s section are from the host club. This caps off a very successful PEI championship season for Team Ferguson, having won the Pepsi Under 21 Junior Women’s championship and the Junior Women’s Canada Games berth, in addition to the U18.

The Emily Sanderson team will be designated as the “finalist” team, as the section finals were against three different teams, but the Sanderson squad were the first to qualify, in the “A” section. Other members of Team Ferguson are third stone Katie Shaw, second Alexis Burris, and lead Lexie Murray, with coach David Murphy. Completing the Sanderson finalist team are third Emma Coffin, second Kaylee Stewart, and lead AnnaMaria MacDonald, with coach Edgar Coffin.

In today’s “C” final, Team Howatt had a 2-1 lead at the fourth end break, but never got to mark the score in the second half, as Ferguson took a single in end five, stole two more in ends six and seven, and sealed the trip to the nationals with a stolen triple in the eighth for a 7-2 victory.

During the closing ceremonies for the girl’s event, presentations were made to the winners of the Coaching award, as voted on by their coaching peers, and the Sportsmanship award, as voted on by all the players in the event. Both awards went to the Nicholson family, with Carl Nicholson, coach of the Rachel MacLean team, taking the coaching, and Avery, second stone with Team MacLean, receiving the Sportsmanship award.

Meanwhile, the three-team Boy’s event is down to one or two games,  and two teams, the Chase MacMillan rink from Charlottetown, and the defending champion Mitchell Schut foursome from the host Cornwall Curling Club, with the advantage going to Team Schut, who, as a double-section winner, have an extra life in the 10 am and (if needed) 2 pm Championship Round on Monday, and can take the Championship with a win in either game, while MacMillan and team will have to win both games.

MacMillan won the “B” section final against Schut 5-3 on Saturday evening, while Schut took the “C”, with a 6-4 win over MacMillan on Sunday afternoon, with a three-point fourth end, the only time either team took more than a single in the match. The third team in the event, the Brayden Snow foursome from the Silver Fox were eliminated with a close 6-4 loss to Schut on Sunday morning. 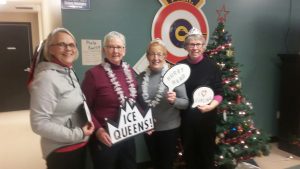 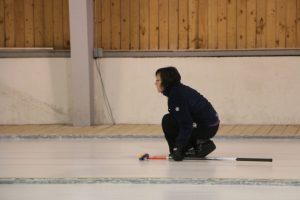 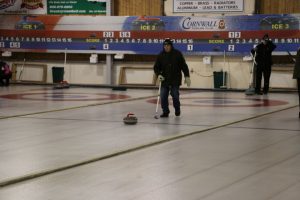 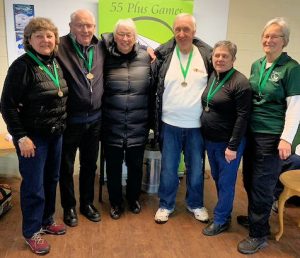