The 9:30 am Sunday semi-finalists for the A, B, and C division Championship rounds have been determined at the Provincial Under 13 Open Curling Championships at the Western Community Curling Club in Alberton, with the winners facing off in the Championship Finals against the first place teams in each division at 1 pm. This is an “Open” event, which means there can be any combination of boys and/or girls on a team.

Brayden Snow at the Pepsi Juniors earlier this season

The Brayden Snow rink from the Silver Fox in Summerside was impressive in the round robin, winning both their games by wide margins and earning a bye to the 1 pm Sunday “A” Final. They’ll be playing the winner of the semi-final game between the Nate Shaw squad from Montague, also undefeated at 2-0, and the Isaiah Dalton foursome from Charlottetown, who had a 1-1 record in the round robin. Snow was on the winning team last year and skipped this year’s Under 16 championship team, while Team Shaw was also in the final game last year.

The Ella Lenentine rink from Cornwall will be looking to defend last year’s “B” division title, and have advanced to the “B” final with 1-1 win-loss record (head to head records, cumulative draw to the button results, and points were used to break ties between teams with the same win-loss records), and will play the winner of the morning “B” semi-final between the Jorja McLellan and James MacWilliams rinks from the Maple Leaf Curling Club in O’Leary, who also have 1-1 records.

The Sydney Carver rink from Montague is back with last year’s team intact, and are also looking for a repeat title in the “C” division, and have already advanced to the division final, with a 1-1 record. They’ll be facing the winner of the 9:30 semi-final between the Mollie Shaw foursome from Charlottetown, and the Carly Sweet and Mary Jane Gavin-Shea squad from the Maple Leaf (both 0-0).

Live results will be available at PEICurling.com 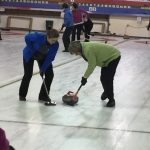 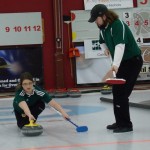 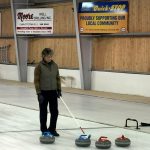 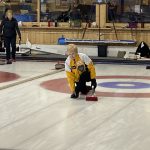