The 2019 Canadian Open Stick Curling Championship is being hosted by the Cornwall Curling Club from March 31-April 3, with curling getting underway at 9 am on Sunday the 31st. Some of the games the first two days are being played at the Charlottetown Curling Complex. Sixty-two two-person teams, from eight provinces and one territory, are taking part. There are 48 teams in the Open division (men and mixed) and 14 in the Women’s division, which was introduced when Cornwall previously hosted the championship back in 2013, and beginning this year, the division is now a permanent part of the championship.
There will be about 170 games played in total. Besides having an “Open” division, the championship is also “open” in that, although spots are reserved for the champions in each province and territory that chooses to participate, additional spots are available for other teams, on a space-available basis.
Much like the other two-person version of curling, “Mixed Doubles”, Stick Curling is relatively new, and both new versions share similarities, although there are also differences. Of course, the biggest difference with Stick Curling is that “delivery sticks” are used to deliver the curling rock from a standing position, rather than having the curler slide out from an ice-level rubber “hack”. Although it can be played and enjoyed by anyone, Stick Curling is designed to accommodate persons who might have difficulty sliding from the hack to deliver a rock. Additionally, and unlike Mixed Doubles, there is no sweeping between the hog lines.
With both sports, the maximum number of points that may be scored per end is six, while eight points (although rare) may be scored in an end of traditional four-person per team curling. Six rocks are thrown per team per end in Stick Curling, while Mixed Doubles has one rock per team pre-positioned on the playing surface, and five rocks are thrown per team in each end. Stick Curling games are six ends and take about an hour to play, while Mixed Doubles games are normally eight ends and take slightly longer. The first Canadian Stick Curling Championship was held in Winnipeg in 2008. Coincidentally, the 1st World Mixed Doubles Championship also took place the same year.

2013 champs Roddie MacLean (left) and Paul Field, after scoring a rare “six-ender” at that event.

When Cornwall previously hosted back in 2013, the Open Division was won by Cornwall’s Roddie MacLean and Paul Field, while the Women’s event was won by Ruth Stavert and Eileen Blanchard, also from the host club. MacLean and Stavert are both back this year.

The official opening ceremony will be held at Cornwall on Sunday, March 31 at 3:45 pm. Off-ice  events include a banquet at the Rodd Royalty Inn on Monday evening, and entertainment and a social time at the Cornwall club on Tuesday evening at 7:30.

Game scores may be accessed at peicurling.com. Everyone is welcome to drop in to either of the Clubs from 9:00 am to 6:00 pm to watch. The final games will be held at Cornwall about 3 pm on Wednesday April 3rd. Further information on this event may be obtained from the event Chair, Ernie Stavert, at eandrstavert@gmail.com
Groups, Draw and Schedule:
Open Division Groups 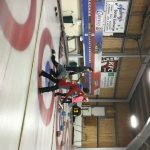 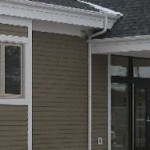 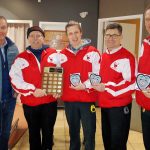 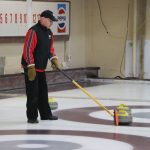