The Club reported another financially successful season, with membership revenue holding steady, and revenue increases in almost all areas, including bar and food sales, pro shop, ice rentals, bonspiels, and lockers. Offsetting this were increases in a number of expenditure lines, including rent (adjusted to the CPI), and, most notably, salaries with an increased minimum wage, and a 3% raise given to regular staff, the first in a number of years, with the Club finishing the season in the black, but with an overall surplus of less than $1000. Treasurer Jean Sinclair CPA, CA suggested a small dues increase for the upcoming season, to ensure that the Club continues to enjoy a positive cash flow.

President Gary O’Sullivan reported that the Club’s facility rental agreement with the Town of Cornwall is being renewed for another 5 years, with ongoing increases pegged to the CPI, as before.

Motions were raised and approved to make changes to the weekly 50X50 “snowball” draw. These draws are typically used in places such as bars to increase attendance at the facility, as patrons will show up to “sign in” and buy something while they are there. The Cornwall Curling Club is a different type of business, though, where members normally show up only during their weekly draw or draws, so there is no real advantage to having them personally “sign in”. Having members “sign in” is actually decreasing, rather than increasing revenue (and winnings for members!) because we have always carried the draw over to a second week if there was a draw cancellation due to a storm or other reason during a given week. The following week, the only people eligible to contribute are the members of the missed draw, and a number of draws were carried over in the recent curling season. Motions were approved to:
(1) Allow members to pay for their 50X50 draw for the entire season in advance, based on the number of weeks in the season.
(2) Allow others to pay and sign in for you if you are unavailable in a given week.
With these changes, the 50X50 will now be held every curling week during the season

Facilities chair Greg Groves reported that the Ice King ice scraper, obtained new in February 2013 and valued at $12,000 to $15,000, may need replacement in the upcoming season. Lance Lowther explained that they are having difficulty obtaining needed parts, but it is possible that the company, under new ownership, will resolve its parts supply problems.

Junior, and Learn to Curl

Junior curling enrollment was down slightly, but the program was very successful, with a large turnout for their U13 event. The instructional program will start Oct. 26 next season.

Another successful season with busy draws. Money was raised to but a new BBQ for the Club. 64 curlers at the Ch’town/Cornwall combined day.

Three news signs – for Cavendish Farms, Fly PEI, and J.A. Langdale Real Estate were sold last year, with signs for C.A.R.S. Auto Repair (Vision Auto) and KFC not renewed. Murphy’s Pharmacies bought an in-ice sign, and plans are to expand on this advertising format. A raffle for the Scotties in Sydney raised $440.

The competition for a new manager was successful, with Lori Fitzpatrick receiving the job offer. She is originally from Newfoundland and has recently been the bar manager of a golf and country club in British Columbia. Welcome!

Icemaker Lance Lowther has agreed to stay on to put the ice in this October. Staffing for new icemaking staff will occur in the fall.

President Gary mentioned the great sponsorship and volunteerism the Club has and urged members who won draws and bonspiels to support the sponsors by using their gift certificates over the summer.

Online Registration, and the same draws and club bonspiels schedule will continue.
The Saturday morning Junior Developmental league didn’t go last season, as a number of teams were competing in off-Island competitions. There are plans to bring the league back for the new season.
Cornwall will be hosting the provincial Senior Men’s and Women’s Curling Championships, (age  50+) and the Maritime Masters Men’s and Women’s Curling Championships (age 60+).

Three members of the Board of Directors – Angela and Myrna Sanderson, and Jean Sinclair, have now served their term on the Board, and three new members were recommended by the Selection Committee, chaired by Past President Gary O’Sullivan. The following new Board Members were approved: Doug Campbell, Jennifer Lenentine, and Amanda MacIntosh.

At the end of the meeting, two-term President O’Sullivan handed the (imaginary) gavel over to Bryan Sutherland, who will take on the role of President for the 2019-2020 season. 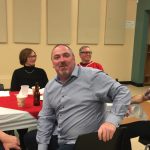 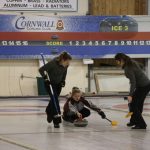 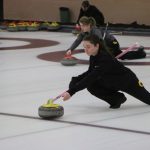 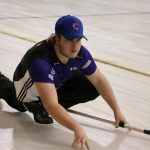