(Brooks is a member of our Tuesday evening Upstreet Craft Brewing league, and would appreciate your support for this great cause!).

CHARLOTTETOWN, P.E.I. — Diagnosed with Type 1 diabetes at the age of four, Brooks Roche, now 24, is used to having his life dictated by the disease he lives with.

Brooks Roche, who lives with type 1 diabetes, will cycle from Tignish to Elmira in September, hoping to raise $10,000 for diabetes.

In 2019, a week into a master’s program in architecture, Roche had to decide whether to continue his education or take care of his health.

“It’s a chronic disease that impacts every decision I have to make. There’s an element of how does this connect with my illness.”

But Roche was fortunate to have access to a continuous glucose monitoring (CGM) system, which will allow him to do something he has only dreamed of — biking across P.E.I.

In the first two weeks of September, Roche will bike from Tignish to Elmira in five legs to raise money as part of Diabetes Canada’s Lace Up to End Diabetes. Donations can be made online.

It’s a far cry from his younger days. Until he got an insulin pump at the age of 10, he couldn’t even play soccer with his friends because it was too risky, he said.

“The decision to bike tip-to-tip comes back and it echoes the fact that at other points in my life I didn’t have the capacity to take on an athletic undertaking like that.”

A CGM device — a small sensor, implanted in his arm, which, as the name suggests, takes continuous readings — can notify him if his blood sugars are rising or dropping too much.

It provides him more freedom by not having to constantly overanalyze every decision and how it will affect his blood sugars, he said.

“It’s the Cadillac of diabetes technology. It does a lot of my work for me and basically, it provides a level of safety that not a lot of people can access.”

That’s because CGM devices aren’t covered in P.E.I. — only Ontario, Quebec and the Yukon offer some funding — which Roche wants to see change, he said.

“If everyone can experience what I did at the individual scale, such a dramatic change in my quality of life, the implications of that are huge.”

Click for the full story by Michael Robar at Saltwire media

As a curler, Brooks is a former Spirit of Sandra Scholarship winner, represented PEI at the Canada Games, is a former provincial junior men’s champion, and also represented UPEI at the 2017 Canadian USports varsity championships (bronze medal).

At the Canadian Juniors, he was also a 2015 recipient of the Joan Mead Legacy Award, in honour of former CBC curling producer Mead, selected by the event officials, and awarded annually to a male and a female junior curler who best exemplify leadership, excellence and fair play, and recognizes community involvement, academic achievement, and volunteerism. 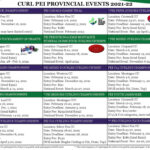