Update from Curl PEI, effective Oct. 25. Draft, not yet final.

The Active Sweeper role remains unchanged but the Skip who has control of the house is now allowed to sweep behind the tee line. This will apply to their own team rocks as well as any contacted opposition rocks. In order to be able to do this, the Skip and Active Sweeper must communicate very clearly what the sweeping intentions are as they must at all times maintain physical distancing.

The situation for the Skip who does not have control of the house has not changed, they are not allowed to sweep under any circumstances.

Welcome to the Wednesday Evening Ladder League, Covid edition! For those who don’t know me, I’m Derek MacEwen, drawmaster for this league. Welcome or welcome back to the league, and to our Orientation. If case I need help, with me is Chris MacDougall, a member of this draw, who also happens to be the President of our Club and a member of the Return to Play committee who have done an excellent job on getting our Club started up in the midst of a worldwide pandemic!

I’m going to keep this orientation short and sweet so we can get on the ice for a six-end practice game.
Apologies to anyone who has already gone thru all this on another night. On the bright side, the bar is open! We’re going to talk about how we move and interact here on the warm side of the glass, and then discuss how we function on the ice, and watch a demo video of game play.

First up is building flow. Unless you need the wheelchair elevator, you will always enter and exit the building at the west door near the pool and playground. There is hand sanitizer at the top of the stairs, at the sign in station, and before going on the ice. You should sanitize at one of the entrance locations and before going on the ice and in general after any other time you are touching things. If you are a member and are coming to curl, you should arrive no more than 20 minutes before your game, come dressed to curl (except for shoes), and turn right at the bottom of stairs.

If you aren’t curling, turn left and check in at the left side of the bar to buy things from the proshop or bar or ask questions.  Everyone is required to sign in. On draw nights will be a sheet in the book with everyone’s name from the draw in alphabetical order by 1st name, & their phone number. You will need to initial at the end of the line. Spares will need to sign in at the bottom of the sheet, leaving their name, phone number, and who they are sparing for. It will be the responsibility of the skip to make sure their spare has done this.

If you are visiting the Pro Shop, please look at, but don’t touch the merchandise, unless you are planning to buy it!

Spectators are discouraged as they cut into the maximum of 50 people who are curling or using the clubhouse. The official mask policy at the Club is that masks are strongly recommended, but are not mandatory. In the evening there will be two groups or “cohorts” in the building, for the early and the late draws, and they are to keep separate. Once in, you go to the benches in the “pre-game” area and put on your shoes. Lockers are closed, at least for now, and there is a limit of two people in both the men’s and women’s washrooms, so you’ll be getting ready at the benches.

After getting dressed to curl, if you are there for the early draw, you are to place your sports bag and coat at the table designated for your sheet in the “post-game” side of the clubhouse to clear the benched area for the later draw curlers. If you are there for the late draw, leave your stuff by the benches until after you get off the ice and the early draw curlers have left the post-game lounge side.

Bar: If you want a pre-game drink, you order from the left side of the bar. If it’s post-game, you order from the right side. Stay seated or be physically distanced until the bar is clear. You are still allowed to buy a drink for the corresponding person on the team that you just beat. Credit and debit cards, particularly contactless ones, are strongly recommended for payment, to cut down on contamination and speed up service. When you have finished your drinks for the evening, put your empty bottles and glasses in the new collection tray for them, rather than bringing them to the bar.

Draw and result boards: We are unable to use our draw bulletin boards due to the mixing of cohorts on the way to the women’s washroom, so use the draw on the website for now while they find a suitable alternative. As for result sheets, you won’t be needing them tonight, but they will be on the long green table between the two halves of the club, thirds are to socially distance when updating them, and there will be “clean” pencils for you to use and a cup for used ones when you’ve marked the score. It was suggested that one third mark for both teams, but we’re going to keep with tradition and have each team mark their own.

Any questions about things here in the Clubhouse?

Now it’s time to talk about the icehouse and how we curl under the new guidelines.
There will be no “club” brooms or stabilizers available for your use in the ice house. If you forget yours, the bar has loaners.

When you go onto the ice, wait until all teams from the previous draw have vacated the icehouse and the ice is ready.  Use the boot cleaner, sanitize your hands, and open the door.
You will always enter via the sheet 4 door. If everybody is going on at once, try to enter in sheet order (sheet one goes first) to limit passing by other teams. When your game is over, exit via the sheet #1 door. If you need to use the washroom, the rules are the same – exit via sheet #1 and return via sheet #4.

Here’s some good news! Curl PEI has listened to complaints from us and others about their suggestion that we not use the scoreboards, but mark the results on a piece of paper or something, and we WILL be able to use them after all. The only stipulation is that one of the thirds, let’s say the one who has hammer, marks the score for both teams, and wipes down the number cards at the end of the game with wipes that will be provided by the scoreboards.

Rock handles are to be sanitized with wipes before your game. One person/one wipe per team.  As the bottoms of the rocks are not sanitized, you are requested to use your broom, not your bare or even gloved hands to clean debris off your rock before throwing. Always use the same stones, & don’t touch other ones.

If you saw the post I sent out on this subject, you will know that we have retired the little Tupperware shakers we were using in lieu of a coin toss to determine 1st end hammer. Thirds can bring their own coin, making sure they are the only ones who touch it, or an app on their phone, or even play Rock, Paper, Scissors. It’s up to you!

Of course, handshakes or other physical contact are not permitted, so just wish the others “good curling” and, I guess, wave at them!

Now for what we came for – game play! I’m sure you’ve all heard that there’s only one sweeper per rock, and that the skip will only get to use his/her broom for throwing, not sweeping. The other main thing to know is that you should be keeping a six foot distance from everybody else.

Now for what we came for – game play! I’m sure you’ve all heard that there’s only one sweeper per rock, and that the skip will only get to use his/her broom for throwing, not sweeping. The other main thing to know is that you should be keeping a six foot distance from everybody else. As for sweeping, the Active Sweeper is allowed to sweep their own team rock from release all the way through to the back of the house. The Active Sweeper is the only player allowed to sweep a rock behind the tee line. If their rock promotes one of their own rocks, they may sweep the promoted rock or continue sweeping the original rock, as directed by the Skip. At no time can the Active Sweeper sweep an opposition rock.

You will notice markings on the ice for where you are to stand when you’re not throwing, and the skip from the non-throwing team is supposed to be out of the house.
For more details on game play, let’s take a look at this video (runtime 5:48) from Alberta featuring the voice of Heather Nedohin.

You will notice markings on the ice for where you are to stand when you’re not throwing, and the skip from the non-throwing team is supposed to be out of the house.
For more details on game play, let’s take a look at this video (runtime 5:48) from Alberta featuring the voice of Heather Nedohin.

Link to news item with video

That’s it! Time for you to hit the ice and play a practice game! 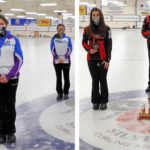